Home / Dangers Of Nanoparticles In Sunscreen

The dangers of nanoparticles in sunscreen was the focus in Sydney, Australia the other day.Â  People came together to make a stink about sunscreen labeling.Â  How do you know if a sunscreen is free of dangerous nanoparticles if they are not labeled?Â  Evidence has recently been growing against their use.

David Hasselhoff recently stopped by and joined local health advocates in Sydney to call for new regulations on nanotechnology in sunscreens. The Baywatch super star offered his fame as a vehicle to get the topic noticed.

Last summer, the U.S. Food and Drug Administration decided not to put labels on sunscreens that contain nanoparticles such as zinc oxide and titanium dioxide.Â  Manufacturers are using these ingredients because they don’t leave a white paste behind when applied to the skin.Â  While this may be cosmetically appealing, at what cost is it to our health?

Titanium Dioxide – (TiO2) is the naturally occurring oxide of titanium.Â  Refined TiO2 is ore blend is made by mixing it with a source of carbon and the two are reacted in a fluidized bed with chlorine at 1650 degrees. (Wow..HOT!).Â  The byproduct is then mixed with concentrated sulfuric acid.Â  After that it is removed of impurities by a chelating process and then treated with chemicals for texture.

There are several alarming facts about titanium dioxide that you need to know.Â  It is used as a window treatment because of its ability to attack and degrade anything that it touches.Â  Just treat your windows with it and they will clean themselves!

It is now known that particles of titanium dioxide as large as 220 nm can enter human cells in a culture. IfÂ TiO2 passes through skin, it could also have the potential to enter cells under the skin and expose them to the UVA radiation and hydroxyl radicals that it has absorbed from the sun.Â  Direct UV light exposure increases the rate of reaction for destroying bacteria and other living organisms.Â  Check out this amazing reference for more information about titanium dioxide and much more.

Zinc Oxide – is the broadest spectrum UVA and UVB reflector that is approved for use as a sunscreen by the FDA.Â  The nanoparticle form of zinc oxide was proven to be 2x as toxic as the powder form when tested with cells in a culture.Â  This test was focusing on the effects of nano materials on the colon.Â  Philip Moos, one of the scientists involved with the study, noted that concentration of nano particles was comparable to eating 2 grams of sunscreen.Â  You should note that these particles in their nano form store in the body and keep building up over time, so you would not necessarily have to ingest that amount all at once to become toxic.

Chemical sunscreens and physical sunblocks generate free radicals when they are exposed to the sun.Â  These can attack the nuclei of your skin cells and/or cause several mutations so it is also good practice to avoid the majority of these as well.Â  Take a look:

When it comes down to sunscreen companies educating consumers about the safety of their products, it is best to use your own common sense and realize that they are trying to sell you something.Â  Many do not care about you or your well-being.Â  I’ve seen a few company websites that show sourced data about the safety of nano particle and chemical sunscreen ingredients but they are almost always studies from the same government agencies that have a revolving door with industry insiders.Â  When will everyone WAKE UP and start demanding more accountability and less fraud?

What I Can Only Describe As Deception…

It’s one thing to not require labeling for products that are proven toxic to humans, but it’s another story when there is deceit involved.Â  The multinational pharmaceutical company Valeant now owns a brand called Invisible Zinc which was the center of an industry wide advertizing controversy.

The ad said Invisible Zinc was nano-free and that other sunscreens may contain harsh chemicals and potentially dangerous ingredients.Â  – ABC News

You would think that this is an honest claim and a valid reason to buy Invisible Zinc Right?Â  Well the Therapeutic Products Advertising Complaints Resolution Panel (TGA) ruled that

the ad be withdrawn and said: “In the total context of the advertisement the repeated statements regarding nanoparticles implied that nanoparticles could be harmful.” – ABC News

So the TGA would rather discourage companies from advertizing that their products do not contain nanoparticles and that they could be dangerous.Â  This shows that some regulators in this industry would rather not deal with the issue at all.Â  They would rather just ignore it and keep everyone in the dark.Â  That was just one of many examples!

I did a little digging around and found that Invisible Zinc does contain “micro particles” and not nanoparticles.Â  Therefore, they claim it is a safer product.Â  In all fairness to them it looks like they have a favorable spot on Friends of the Earth‘s safe sunscreen guide so do some of your own research and check it out.Â  I can’t vouch for them but the list looks fairly reasonable if you want to block both types of UV from your skin. (Which is going to block UVB, the part of the sun that produces Vitamin D3 in your body)!Â  But, more on that in another post…

I found a list of ten red flags about nanoparticles that you and everyone you know need to read and understand.Â  Please read this and pass along to others!Â  Source: ETC Group 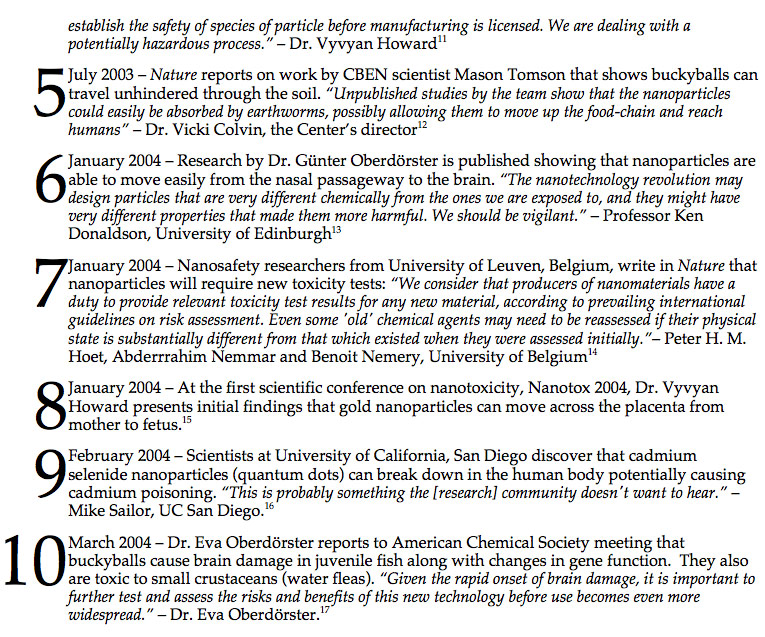 Monsanto’s Corn Approved Despite Dangers Of GMO From Testing

Root Canals Are Bad For Your Health